[TL;DR: I’m donating a portion of the sales of my poetry book, from now through the end of the year, to the Depression and Bipolar Support Alliance. There’s more info about them, and links, in the post below. My ebook is only 99 cents, a small amount for most people, and the more copies I sell, the more money I can donate! Whether you get ebooks from Amazon, Apple’s iBooks, Barnes & Noble, Kobo, or Smashwords, just click here, and then choose the link to your preferred vendor from that page. Thank you!]

Part of the description for my poetry collection (titled, appropriately enough, Happenings, Heartbeats, and Mental Breakdowns) states that the book might bring comfort to people who have suffered from depression or another mental illness. This is because I’ve struggled with depression since I was about ten years old, and I’ve been in counseling off and on since I was twelve. A lot of my poems have dark undertones, and explore the shadowy places that will be familiar to many people who have battled depression. Some of them include signs of hope and light, but there are a couple that really don’t. Still, I remember that quote from the movie Shadowlands: “We read to know we are not alone.” One takeaway from even my darkest poems is this: if you’ve ever felt hopeless, if you’ve experienced despair, if you’ve lost someone you loved and thought the grief would swallow you whole, You Are Not Alone. I have been where you are, and there are many others who have been there, too, and might be there today.

The second takeaway: I am still here. Some days I want to give up, and other days, I can’t even GET up. But a little time passes, I gather as much strength as I can (and I probably grab some caffeine and/or chocolate), and I face another day. I am alive, I am employed, I have a family, and I’m still (albeit intermittently) pursuing my goal of becoming a better writer.

It’s true that novels generally sell better than short stories. I don’t have numbers, but I wouldn’t be surprised if story collections, in turn, sell better than poetry. Yet I can’t help thinking, my poetry collection is pretty good, and there are potential readers out there who would enjoy the book, and see themselves reflected in some of the poems. And a few days ago, I had this idea: instead of only promoting my book, I could “pay it forward.” 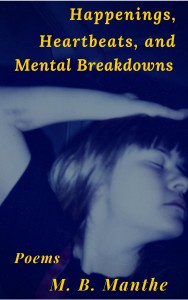 From now through the end of this year, I’ll donate 25% of the net sales of my poetry book to a non-profit organization that helps people who have depression or a similar mental illness. I am leaning toward the Depression and Bipolar Support Alliance, which I had heard of, but I honestly didn’t know anything about them. When I started looking at their website, the thing that impressed me first was reading this statement on their “About DBSA” page, in the section about what makes them different from other mental health-related non-profits:

Peer-led: More than half of the DBSA staff and board members live with a mood disorder and all DBSA support groups are facilitated by peers

And I thought, Wait a second … a lot of the people running the organization and employed there are fighting the same battles as the people seeking help. Hmmm. As I continued clicking around, I found a Media Kit, and an information sheet about the current president of DBSA, Allen Doederlein. He is introduced with this:

Allen Doederlein has been president of DBSA since 2011, an executive with the organization since 2009. Doederlein first experienced a mood disorder at age 17, the third generation of his family to do so.

My father told me that he had his own “nervous breakdowns” at ages thirteen and seventeen. He was diagnosed as manic-depressive (i.e. bipolar) during or soon after that second breakdown, circa 1959. He had some number of shock treatments during that time period, long before I was born. When I was a teenager myself, already struggling with depression, it sometimes felt like I had two different fathers: my “regular” dad (to be clear, I wouldn’t really call him “normal” even then), and my “manic” dad. It wasn’t just his behavior that changed, or the fact that he wouldn’t stop talking; even his voice was different. Anyway, supporting an organization that focuses on depression and bipolar disorder would honor my dad’s memory, and help others with the same condition, as well as people with depression.

The other thing that pointed me toward DBSA is their high ratings on Charity Navigator (four out of four stars, overall score of 93.83 out of 100) and on GuideStar, which identifies DBSA as a “Platinum-level” organization. These rankings have convinced me that not only is this a legitimate non-profit organization, but it’s committed to doing good, to helping people who desperately need it. They stress the importance of the “lived experience” of people living with mood disorders, as well as a commitment to helping the family members of people battling these illnesses.

My book is very reasonably priced, and from now until the end of the year, I’ll give 25% of my net profits to a worthy non-profit — probably DBSA. (You know, unless there’s some terrible news about them between now and the end of the year, courtesy of WikiLeaks or an old Access Hollywood recording … please Lord, don’t let anything like that happen!) With this one link, you’ll find a landing page to choose your preferred ebook vendor, and click through to buy Happenings, Heartbeats, and Mental Breakdowns. If you want a print version, that’s only available through Amazon — again, same link. If you want to buy a signed copy directly from me, please email me at lightedlakepress (at) gmail (dot) com to find out more!