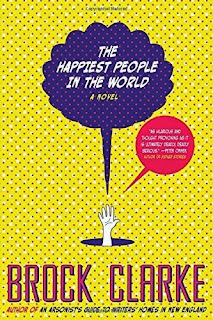 For the record: I received this book (an actual hardcover book!) for review from Algonquin Books, through LibraryThing’s Early Reviewers program. This does not affect the content of my review, but since I truly did love the book, I’m incredibly thankful to have a “real” copy and not just an ARC.
I’ve delayed this review so long, I hardly know where to begin. So, I will begin at the beginning. The novel contains eight parts, with a total of 67 chapters. The lengths of the parts are wildly uneven: Part one contains chapter 1, which is only four pages long. It doesn’t quite function as a prologue, exactly, but sort of as a smoky glimpse of things to come. I use the word “smoky” to mean the scene is literally smoky. The first page of the book contains the sentence, “The smoke was so thick the moose head was barely able to see the people it was intended to spy on.” From the book’s jacket, the reader learns that the novel will include a cartoonist from Denmark — home of “the happiest people in the world” (except for that guy Hamlet, who I seem to recall was super unhappy) — and some CIA agents, and a high school principal in a small town in upstate New York, plus the principal’s wife. We know there are CIA agents, so the mention of spying right on the first page isn’t wholly unexpected.
Part two begins with chapter 2, in which we meet the aforementioned Danish cartoonist. The timing of my reading of this book was very strange. I got the book in October, but didn’t actually read it until early January. Only a few days after the attacks on the satirical newspaper Charlie Hebdo in Paris, I found myself reading about a similar kind of situation in a fictitious newspaper in Denmark. I had waited too long to start reading the book, but ended up reading it almost simultaneously with current real-world events. In the novel, the reason the cartoonist draws a controversial cartoon depicting the prophet Muhammad is quite mundane: his boss tells him to draw one. The reason the boss tells him to draw the cartoon is really a slap in the face for anyone who believes in freedom of expression: the editor hates his job, but the newspaper had been “owned and run by his family for almost two centuries. Quitting the paper would be like quitting his family” (p. 14). He realizes that if the paper prints a controversial cartoon, the backlash will require him to close up shop, and he’ll no longer be stuck in this job that he hates. (Selfish bastard.)
The newspaper offices are attacked, and the cartoonist’s house is burned down. The cartoonist is declared dead, but in reality, he’s alive and being protected by the CIA. After a couple few years of being shuttled here and there, the Danish cartoonist is given a new identity, Henry Larsen of Sweden. His CIA handler, a woman nicknamed Locs, travels with him to the US, then puts him on a bus to a little town in upstate New York called Broomeville. We learn that Locs used to live in Broomeville, and had an affair with the junior-senior high school principal, Matty. Although he had loved Locs, he’d broken it off with her and remained with his wife, Ellen, and their son, Kurt. Before bringing Henry to America, Locs got in contact with Matty, told him that she’d joined the CIA after their affair ended, and asked him if he had a job available for the man under her protection. Matty agrees to hire Henry Larsen as the school’s guidance counselor.
The novel’s plot is fairly complicated, and there are a number of quirky characters, but I felt most of the central characters were fleshed out and interesting. Although the details of the plot were far-fetched and improbable, the characters’ actions and emotions rang true. Locs still misses Matty, still loves him, although their affair ended seven years before. Ellen is still hurt by Matty’s betrayal, and when she hears someone else refer to him as “Matthew,” the name only Locs called him, she’s instantly suspicious. Their son Kurt, now a teenager, is intrigued by Henry, and curious about his sudden appearance in Broomeville, but also tells him impulsively when they first meet, “‘I’m definitely going to be needing your guidance counseling’” (p.77).
I found Brock Clarke’s writing to be propulsive. The book I read right before this one was a novella — I think it was less than 100 pages — and it took me about ten days to finish it. Then I started The Happiest People in the World, and I tore through it in three days. I thought the premise was interesting, and the first couple of chapters pulled me in quickly. In chapter 5, when Locs calls Matty to tell him she’s with the CIA and ask if he can give Henry a job, this paragraph appears:

I read that, laughed out loud, then walked to the other room and read the paragraph to my husband. From that point, I was all in on this novel. I liked the main characters, the secondary characters were pretty entertaining, the plot kept me guessing, but the thing I enjoyed most about the book was that tone, that voice, which could be funny, or serious, or sometimes both at the same time. The all-over-the-place feeling reminded me of my response to the novel A Fraction of the Whole by Steve Toltz, which I read in 2011 and love love loved; this is the first time another novel reminded me of Toltz’s book. (That title links to my post about the book, in case wacky happenings are your thing.)
Here’s an extreme example, in which Ellen is driving Henry to the school in the snow, a ride that takes approximately one minute. If you like this, then you should definitely give this book a try.

In this way, Henry learned several things.That once Americans were out of the cold and in their trucks, they did not like to get back out into the cold, even if it meant making the inside of their trucks as cold as the outside; that American weathermen liked to refer to snow as “the white stuff”; that American sports talk radio announcers liked to say about something, “There’s no doubt about it,” before then expressing their many doubts about it; that American political commentators liked to preface their comments by saying, “No offense,” before then saying something offensive (the political commentator on the radio had said to whomever he was talking to, “No offense, but you have to be the stupidest human being on the planet”); that Americans were very impatient people with very short attention spans; that Americans believed as long as they were inside their trucks they were invisible, and that as long as they smoked cigarettes inside their trucks they would not then smell like cigarettes once they exited their trucks, and that in general Americans thought their trucks were magic; that while Europeans tended to think of Americans as people who liked to drive incredibly long distances in their pickup trucks, in fact Americans liked to drive incredibly short distances in their pickup trucks as well. These were the lessons Henry learned about Americans during his first minute in Ellen’s truck, and not once was he forced to reconsider them during all his days in Broomeville. (p. 92)

These are over-generalizations, of course, but there’s some amount of truth to them, in that everything in the paragraph sounds familiar to me. I’ve never driven a pickup truck, but I really do like my car, and most Americans seem to be quite fond of their motor vehicles. Meteorologists really do use the term “the white stuff” in areas of the country that get snowfall. Talk radio … well, no offense, but I think Clarke’s got the gist of it. If you can’t stand this paragraph, the book is probably not for you, although as I said, this is one of the more extreme examples. But, if you read it and thought, “Yes, I want more!” then you’ve come to the right place.

I loved taking the crazy journeys Clarke maps out in this novel. I was interested in his previous novel because of its unusual title, An Arsonist’s Guide to Writers’ Homes in New England, but hadn’t actually read it. Now that I’ve read The Happiest People twice, I decided to purchase that earlier book for my ereader. I don’t think I’ll be disappointed.