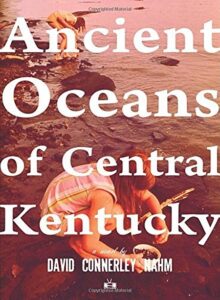 Ancient Oceans of Central Kentucky is the kind of book that can cast a spell over you, one that pulls you in. The writing is so beautiful, and the book’s mood so evocative, after you finish it, you’ll find yourself wanting to read it again.

I learned about this debut novel when the author, David Connerley Nahm, was interviewed [Edited link to redirect via Wayback Machine] on Brad Listi’s Other Ppl podcast. (That’s the podcast formerly known as Other People, which is still called “Other People” but is now spelled in that shorter and hipper style.) During the interview, I heard that the book was getting good reviews, that it involved kids telling scary stories, that Nahm is actually a practicing lawyer, and that he spent fifteen years (off and on) writing this novel. I decided to check my public library‘s catalog, and was amazed to see that it had been pre-ordered. (This appears to be the first book published by Two Dollar Radio that my library has purchased.) When it was available and I checked it out, I was honored and excited to see I was the first person to borrow it!

The book is about Leah Shepherd, a woman directing a non-profit agency in her hometown of Crow Station, Kentucky. When she was about ten years old, her younger brother, Jacob, went missing. He was never found, neither alive nor dead. The story is told by a third-person narrator who might be omniscient, but if he is, he certainly doesn’t tell us everything. Most of the book is written from Leah’s perspective, though some of the short sections put us inside other characters’ heads — primarily Leah’s mother, but also her father, and Jacob (in flashbacks). There are also passages about the everyday life of the town and its residents, which add to the immediacy of the story. I felt like I was inside the skin of everyone in Crow Station.

The story is not linear, and there’s not much “action.” Instead, Nahm masterfully takes us inside Leah’s thoughts, emotions, and memories. We see her at work, or walking outside, or talking with her mother, and alongside the mundane activities of most days, we watch her mind wander, and we learn about her past. Through her, we get to know Jacob, find out what they both were like as children, and share the confusion and grief the family felt when Jacob first disappeared, and in the months and years that followed. In the same way that people get distracted, or if they see or hear something that reminds them of something else — perhaps from far away and many years in the past — the novel follows Leah’s trains of thought more than any kind of plot.

The best thing about Ancient Oceans of Central Kentucky is the quality of the writing. At the most basic level — sentences and paragraphs — this is truly a fantastic book. Here are a few excerpts to give you a sense of the style:


It is impossible to sleep in such heat, the body turning and twisting and tacky with sweat, so everyone stays up all night, listening to the chorus of crickets sounding the depth of the dark. And every night is every night that ever was all at once and every lonely boy prone in his bed is every lonely girl prone in hers, chests heaving with that painful pressure of hoping that there is someone out there unable to sleep on their account. The thunder ends. The crickets quiet. The houses settle and the only sound left is heavy breath in the night air. They get up, walk to the window and stare out at the dark yard, shallow breaths catching as they watch the shifting shape of the shadows, but it was nothing, they are certain, nothing but breeze, nothing, they are certain. (p. 28)

Distant howls and cries. They crept up the stairs toward a dim hallway and heard a voice, distant and low, and they knew that they’d found the horrific heart of the crumbling maze and would have to face the creature that writhed there. They peeked around the corner, to see what they could see. (p. 14)

And for this one, part of a description of Leah’s workplace, I just had to share a photo of page 69 so you’d get the full effect: 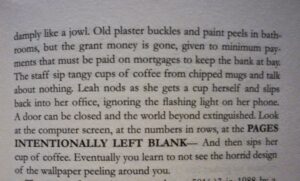 As I read Ancient Oceans, the other book that kept coming to mind was Tinkers by Paul Harding, another stream-of-consciousness type of novel with gorgeous language, that went on to win the Pulitzer Prize. Do I need to say more than that? David Connerley Nahm is a gifted writer, and I hope this novel becomes one of those small press success stories. And then, I hope he can find time to write more beautiful books.

© All the parts of my life.