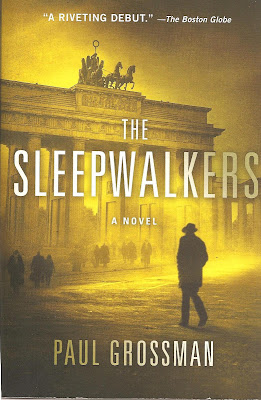 In the final weeks of the Weimar Republic, as Hitler and his National Socialist party angle to assume control of Germany, beautiful girls are seen sleepwalking through the streets. Then, a young woman of mysterious origin, with her legs bizarrely deformed, is pulled dead from the Havel River. Willi Kraus, a high ranking detective in Berlin’s police force, begins a murder investigation. A decorated World War I hero and the nation’s most famous detective, Willi also is a Jew. Despite his elite status in the criminal police, he is disturbed by the direction Germany is taking. Working urgently to solve the murder, Willi finds his superiors diverting him at every turn. As he moves through darkness closer to the truth, Willi begins to understand that much more than the solution to a murder is at stake. What he discovers will mean that his life, the lives of his friends and family, and Germany itself will never be the same.

(First, an admission: when I saw this book on LibraryThing’s Early Reviewers list, I was drawn to it because the cover reminded me of my copy of The Shadow of the Wind. The description intrigued me, and that’s why I requested it, but it was the cover that initially grabbed me. Do you see a small resemblance too?)

The story begins in November 1932, when the body of an unknown woman is pulled from a river, and Willi Kraus is assigned to the case. However, in chapter three, Willi receives orders to find the daughter of the king of Bulgaria, who came to Berlin with her husband a few days before and has since disappeared. Willi doesn’t investigate missing person cases – he’s a homicide detective – but President von Hindenburg wants to assure the Bulgarian ruler that Germany’s best Inspektor-Detektiv is searching for the princess. Fortunately, Willi’s junior apprentice, Gunther, is dedicated and very bright, and he’s able to continue digging for evidence in the murder case while Willi tries to find the princess.

As Willi and Gunther investigate the two crimes, they find a few similarities between them – for instance, the body was found in Spandau, and the princess was last seen alive in the same area. They also find hints that both cases might be part of a larger plot: a number of people, mostly young women, who had appeared to be sleepwalking and then went missing; evacuations of dozens of people from a state hospital, with no record of where they’d been taken; and the fact that several of the missing persons had been linked with a hypnotist called the Great Gustave. All of this takes place while the German government is in turmoil, and the Nazi Party is gaining strength. Willi begins to fear for the safety of his sons and the rest of his family, and eventually for his own life. It’s difficult to know who’s telling the truth, who can be trusted.

Paul Grossman is a great storyteller, and the pacing in The Sleepwalkers is excellent. From the very first chapter, the wheels are in motion: characters introduced and gradually revealed, crimes to be investigated, and pieces of evidence located and examined. Through all this, the tentacles of the Nazi Party stretch further and further over everything in the story. Grossman weaves the elements together in ways that make sense, and keep the reader engaged.

The Sleepwalkers is definitely a thriller, but more a psychological thriller than an action story. It’s much more than a murder mystery, and not a “typical” historical novel. I’d call it a historical thriller: some of the characters, places, and plot details are fictional, but the backdrop of the Nazi Party’s machinations and the increasing horror uncovered by Willi and his allies is, sadly, based on fact. In a note at the end of the book, Grossman indicates which parts of the story are true, but adds that most of the incidents occurred several years later than the timeline in his book.

Given the difficult subject matter and disturbing events and imagery, The Sleepwalkers isn’t suitable for everyone. That said, it’s an intelligent, entertaining, sexy, scary, and thought-provoking novel. Highly recommended.

I received a paperback copy of this book from the publisher, St. Martin’s Griffin, through the LibraryThing Early Reviewers program. I appreciate the opportunity to review this book, and hope that LT helps it to reach a wider audience.