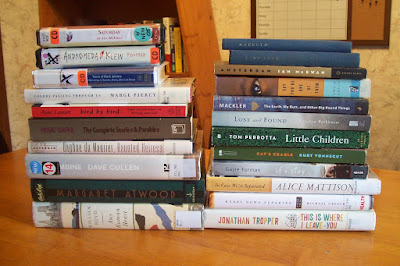 It’s been a full week since Friends Night at the annual TSCPL book sale, and I’m only NOW able to post about it, although I took the photo and entered everything into my LibraryThing catalog last Saturday. Life is just too damn busy. Also, when I DO have some free time, I usually choose to read rather than blog … and of course I can read in bed with a booklight before I go to sleep, and it would be much more difficult to write a blog post in that same position and situation. But, I digress.

The book sale was great, and I found a bunch of books that look really good, including a few that had caught my eye several times in the past, and I finally went ahead and bought them – such as Little Children, Say You’re One of Them, and Bird by Bird. But Saturday, amazingly, I said to Jeff, “I think I might have too many books, I guess I should get rid of some of them.” And then I started clearing out some books — not too many, but a small pile or two! I was able to make room for some of my new acquisitions, but I still have maybe half of them to put away.

Even though I found good stuff, I didn’t have the same euphoria at the sale this year that I’ve had in most prior years. Yet I was able to spend more than I’d expected to: after paying my $52.00, I literally had one dollar bill and a bunch of change in my wallet, and that was all. In my defense, I have to say that every item I got was $2.00, because I didn’t even go near the mass market paperbacks which were only $1.00 each. Also, four of the books I got are for my mother-in-law. (Those aren’t in the picture.) So my item total was 19 print books (some hardcover, some trade size paperbacks) and three audiobooks — all of them only $2.00 each, and if you think of it from that perspective, it’s quite amazing! No, I didn’t get any books for the boys, but darn it, a few of them are YA and they might like them someday when they’re older. Having read and loved King Dork, I’m psyched to have the audio of Andromeda Klein, and when my boys are older teenagers, I hope they might read and enjoy them both, because Frank Portman is completely hysterical!

So many things I want to write about lately, and as I said, never enough time or energy. I wrote a few pages in my notebook last night, might scan and post that later, but otherwise, I’ve just been reading and thinking, in between all the time working and being mom and cleaning house and just getting by. Next on the list: getting to bed, since it’s midnight. But check out that photo again; man, I got some really good stuff. 😀