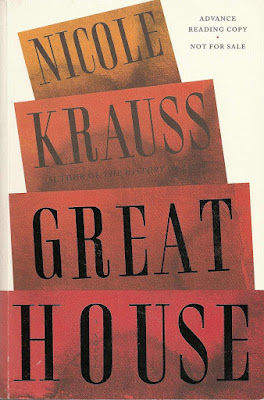 (I really love the way the words dominate the cover. I always hear them in my head when I look at the book: “Nicole. KRAUSS. Great. HOUSE.” It reinforces the rhyme.)

Thank you to W. W. Norton & Company, and to LibraryThing, for the advance reader’s copy of the novel Great House by Nicole Krauss. I won the ARC through the LibraryThing Early Reviewers program.

The minute I finished reading The History of Love by Nicole Krauss a couple of years ago, I brought the book up to my face and lightly kissed the top edge of the cover. If the book cover were a face, and had a forehead, that’s about the spot where I would have been kissing it, on its forehead. It’s an excellent novel, it kept me guessing, the writing was wonderful, and it probably came into my reading life at the perfect time.

Because I had enjoyed The History of Love so much, I was very happy to find out that I’d won a copy of Krauss’s new novel, Great House, from W. W. Norton, through LibraryThing’s Early Reviewer’s program. I received an ARC of the book on Sept. 13, and finished reading it on Sept. 26. Yes, that was about five weeks ago; health-related issues delayed the writing of this review, which I actually started writing TWO weeks ago. I’m embarrassed that it’s taken me so long to write this (and finish writing it), but I think the additional time I’ve thought about the book has led me to view it more positively – so there’s the silver lining to my delay.

I remember at least two different narrators from Krauss’s previous novel. In this one, there are four, each one narrating two chapters. One other review of I saw of Great House noted a “sameness” to the narrators, that it was somewhat difficult to distinguish between them. I don’t think that’s entirely fair. The History of Love had a man in his sixties and a teenage girl, who are bound to speak very differently. Great House has two women and two men, both of the men in their sixties or seventies. The narrator of the “True Kindness” chapters reminds me of Leo from the earlier book, and his is the most distinctive and “interesting” of the narrative voices, but I enjoyed all four in different ways, and became caught up with all four storylines.

Possible Spoilers Ahead!
I try not to include spoilers, except maybe when I’m writing about classics, but some of what I say about Great House could be considered “spoilery,” so proceed with caution. In the blurb on the back of the book (at least of my ARC), after some talk about the different characters (and their basic storylines), it says, “These worlds are anchored by a desk of enormous dimension and many drawers that exerts a power over those who possess it or give it away.” The back of the book actually talks about three of the four main storylines. As I read the book, I kept track of when, and how long, a character owned the massive desk. Toward the end of the book, I found that one of the storylines apparently had nothing to do with The Desk, and I felt a bit cheated, because here I was expecting to find The Desk in every narrator’s story. Near the very end of one of the other stories, one of the characters from the “non-Desk story” intersects with a character from one of the three “main” (Desk) stories.

When I first finished the novel, I confess I was a little disappointed. The writing was excellent, and as I said, the stories and characters certainly held my interest, even if I never felt close to kissing the book. My feeling about the non-Desk storyline was, Why the hell was it in there at all? The other feeling I had was that I wanted MORE – that if Krauss was going to bring two characters together from different story arcs very late in the novel, it would be nice if we could see where it might be going, not just, “Oh hey, that’s THAT guy. Huh, that’s interesting. I guess I hope he doesn’t die.” In the weeks since I finished reading the book, I’ve changed my mind about this. I’ve decided that, rather than spelling out what happens to the two characters, or giving “hints” so strong or obvious that we’ll know the outcome, Krauss leaves it up to the reader to guess what happens, and I’m okay with that. My take on it goes like this: One character lost The Desk that she’d owned for 25 years, represented her writing successes, and reminded her of the person who’d previously owned it, and the other character had given up so much, and was now close to losing his life. I think he WILL survive, and ultimately they can help one another rebuild their lives.

The novel follows The Desk back and forth through time – and in fact, the way Krauss bends the timeline in the different story arcs can make the reader a bit dizzy, a little bit lost in the Great House. One character’s actions, both long in the past and in the “present” of the novel’s main story, and that character’s obsessive desire to find and claim The Desk, impact nearly everyone else in the novel, to a greater or lesser degree. The need to recapture the past, taken to such an extreme, shuts out any hope for the future, not just for the person who looks only to the past, but often for those closest to them. Krauss allows hopeful (not immediately “happy”) endings for those who remember the past, but strive to live in the present. And throughout, of course, the writing is gorgeous.