Today is the fiftieth anniversary of the publication of To Kill a Mockingbird by Harper Lee. It is one of very few books that I would recommend to anyone, if they haven’t read it yet. It’s the only book that I recommend to people who don’t read very often. During my husband’s months of unemployment, I finally got so upset about his not having read it, that he listened to the audiobook. (Sissy Spacek’s narration is, in my opinion, as close to perfect as it possibly could be. I love when she reads, as Scout, “‘Ain’t nobody gonna do Jem that way!'” I’ve listened to it twice.) There were events held all around the U.S. today, but there are a handful more coming up in the days and weeks ahead. To see the schedule, and find out more about Harper Lee and her truly beautiful book, visit the 50 anniversary website, by HarperCollins Publishers.

In other years, for me, July 11 has marked another anniversary: my parents’ wedding. They were married in 1970, forty years ago today. I had a thought this weekend that might sound bizarre, but I found it comforting: that this year, Ma and Da are together for their anniversary for the first time since 2004. He died in May 2005, and she in October 2009. I imagine they are together in heaven today, perhaps dancing to an Elvis Presley song — a ballad, as my mom was never one to “cut up a rug” to fast songs. (My dad had no shame and would dance to fast songs, to the horror and embarrassment of all the rest of us.) So Happy Anniversary thoughts for Christine and Harry, two damaged people who found one another, brought me into the world, and raised me to be strong enough to leave them. 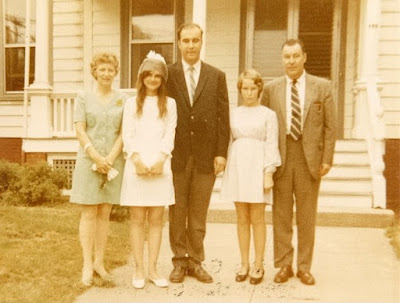