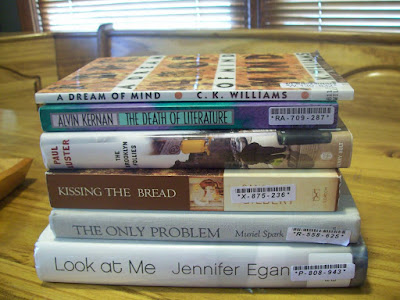 This is my first Mailbox Monday post. I don’t get LOTS of books in the mail, and rarely more than one or two at a time. (And of course, I began this year planning to buy FEWER books … but please don’t ask how that’s been working out for me, that’s another story.) But a couple weeks ago, Better World Books had one of their Bargain Bin sales: selected titles priced at Five Books for Fifteen Dollars. I’ve ordered from them a few times in the past, but I don’t think I’d ever done the five for $15 deal before, and I suddenly thought, “I gotta check this out!” It took a little while to decide upon five books – okay, it took a longer time than it should have, and I could have been doing something more productive for 80% of that time – but I’m really happy with my choices.

When the package arrived on Saturday, here’s what it contained: Look at Me by Jennifer Egan – I just listened to The Keep on audio and really got into the second half of it and some of the twists, wanted to try another by her; The Only Problem by Muriel Spark, whom I like very much; Kissing the Bread, a large volume of “new and selected poems” by Sandra Gilbert, a well-known literary critic and perhaps lesser-known poet – I got one of her poetry books from the library a year or so ago and was quite impressed; The Death of Literature by Alvin Kernan, one of those criticism titles that had been on my “watch list” for a while; and A Dream of Mind, by a poet I’d like to know better, C. K. Williams.

The sixth book in the pile didn’t come by mail, but since it was also a weekend acquisition, I added it to the stack. It’s The Brooklyn Follies by Paul Auster, another of those writers I haven’t read yet but really want to. I was at Barnes & Noble yesterday to get a Lightwedge book light for my mother-in-law (with my membership and an extra coupon), and I browsed the bargain books, finding the Auster in hardcover for $5.98 – member price was $5.38, thanks very much. While in the store, I also took a few moments to examine copies of two books winning rave reviews these days: The Immortal Life of Henrietta Lacks by Rebecca Skloot, and Matterhorn, a debut novel thirty years in the making by decorated Vietnam veteran Karl Marlantes.

OH, I ALMOST FORGOT: I also got to play with Barnes & Noble’s nook e-reader!!! I walked into the store, and they have a nook booth set up just a few feet inside the door, it was SO GREAT!!! I walked away, then came back, and began by saying, “I have over 400 books at home that I haven’t read yet, so there’s no way I’m going to buy one of these, but can I just look at it for a few minutes?” And the two women were really cool about it. The navigation wasn’t the most intuitive – maybe I’m too used to my iPod Touch – but I’d certainly be open to looking at it again more closely. 😉

Mailbox Monday is a weekly meme hosted by Marcia at The Printed Page. Head on over there to see what other bookish goodies came into book bloggers’ homes this past week, and be ready to add to your wishlist!