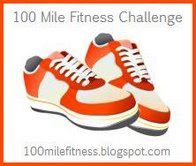 A blogger named Trish (of Trish’s Reading Nook) is leading the 100 Mile Fitness Challenge, in which participants try to walk or run 100 miles during a three-month period — specifically, January 1 through March 31, 2010. You can substitute other exercise as well, as long as it falls within the guidelines. Fifteen minutes of another kind of exercise counts as one mile. I learned about this challenge in early October, but just didn’t get my act together to participate. By posting here, and then linking over to the main challenge page, hopefully I’ll be motivated to stick with what I’ve started.

Although Trish is leading the challenge, she writes in the 100 Mile Fitness blog that she did not make up the challenge, but isn’t sure where it originated. But she gets the credit for setting up the blog and bringing the challenge to book bloggers. So, I also want to acknowledge Rebecca, who blogs at Lost in Books, because I’m pretty sure that’s where I first read about this challenge.

I walked on the treadmill today, knowing that I was starting the challenge, and completed three and a half miles. However, I just reviewed the rules this evening and found that partial miles aren’t allowed. Darn it, I should have just stopped at three! But even if that distance doesn’t count for the challenge, I was still burning calories, which is more important in the long run.

My plan to complete this challenge is to watch lots of TV on DVD while spending quality time with the cool treadmill we bought last summer. I started watching one of my Christmas presents today: the first two episodes of the first season of Pushing Daisies. (That’s probably my favorite gift that I didn’t already know I was getting. Three of my presents were things I bought/ordered myself, then told Jeff to give me for Xmas: two books, one CD. I’m easy to shop for, see?!?) This afternoon, I bought season three of Friday Night Lights on sale at Best Buy. I am SO EXCITED that season four of FNL will be starting on NBC before too long! (Note to self: find out NBC premiere date ASAP!)

Finally, we also got a couple Wii games for Christmas that should help me: Wii Fit Plus, and a Jillian Michaels game. I weighed myself with Wii Fit Plus today before I started on the treadmill, and plan to track my weight as I go along. I was happily surprised to find I’d only gained three pounds since whenever I did my last weigh-in (easily at least two months ago, possibly much longer). I figured it would be worse, like eight or ten pounds, so I can handle three. 😉

Hopefully I’ll get my next post up, about my 2010 reading challenge, before the end of the weekend. After being pretty quiet this fall, I’ve been feeling energized to get things written! And it feels good.