That was a question I asked Jeff in the Intensive Care family waiting room on Friday, September 19, 2008. My father-in-law’s condition was not improving. He was on a ventilator, and hadn’t taken a breath on his own since about 6am that day, when he’d collapsed at home. His kidney had stopped working, his lungs had failed, his blood pressure wasn’t going up even with the maximum amounts of three different BP medications streaming into his veins. His pupils were fixed and dilated, and he’d remained unresponsive. Even in the morning hours, the ER doctor had warned us that no one could be sure how long Gerald had gone without oxygen, that even if he were revived, there might be brain damage.

But that was earlier in the day, when we had hope. They told us that he wouldn’t wake up until the following day, at least – maybe in two days. Somewhere around lunch time (not that anyone ate a lot), the cardiologist told us that Gerald’s heart muscles were actually quite strong, but if his blood pressure didn’t come up soon, the medications to increase his BP would begin to damage his heart. Still, he said, think positive, be strong, have hope.

Late in the afternoon, Jeff’s sister Stacy came back to the waiting room in tears, but angry. Gerald had been seen by a cardiologist and a pulmonary specialist, but the nurses had been waiting for the kidney specialist. Now, Stacy said, the staff seemed less concerned about the kidney specialist coming by. Then, the nurses and the pulmonary specialist began asking Sue, as tactfully as they could, what should be done if Gerald’s heart stops again? The scenario was something like this: they could do CPR again, but if it was successful, there was essentially no chance at that point of him surviving without being hooked up to machines. It was around this time that I wondered, Should we just hope now that his heart keeps beating? Because once it stops, it’s all over. Or were we beyond hope by then?

I remember Rick, Stacy’s husband, coming back from Gerald’s bedside, and saying, “He was fighting all day, he couldn’t fight any more.” Oh God. It can’t be real, this can’t be. What will happen to us all now, without him? Kyle said, “Everything will be different now, nothing will be the same as it was.” He sobbed. When he was angry at me and Jeff, he called Papa. When he had news to share, he called Papa. Kyle and Papa were running a team in Jeff’s online fantasy football league; whenever Kyle saw they’d been offered a trade, he called Papa to talk about whether they should take it. Kyle knew my in-laws’ phone number before he learned his own! Papa loved all six of his grandsons, but Kyle was the first, and until he was 2 1/2 and Ryan was born, he was the only grandchild. Kyle and Papa had always been buddies, and I couldn’t imagine Kyle losing Papa at only eight years old, still young enough to climb on Papa’s big, comfortable lap. Kyle, my little son. 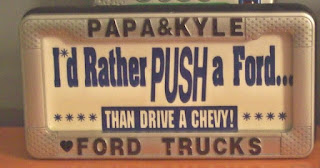 I remember hugging Sue tightly and saying, “I feel terrible for you, I feel terrible for you.” They’d celebrated their 40th wedding anniversary this past April. They didn’t have many separate interests; they did nearly everything together. It is hard to think of one without the other, but suddenly, inexplicably, only one is left. Surely Gerald is in heaven – he was a good, kind, responsible man – but I can’t help thinking he’d still rather be down here with Sue, and with his children, watching his grandsons grow up.