I’ve made my last blood donation. I waited more than a year and a half after the last one, when I nearly passed out, but yesterday, they were having another blood drive at work, and I thought I’d give it a try. I got through most of it, then almost passed out again. Nope, I’m not going to give any more.

This makes me a little sad. The first time I donated blood was in 1991, when I was 20 years old. My grandfather (my mom’s father) died in September of that year, and I donated at a blood drive at Community College of Rhode Island (that would be “See See Ah Rye” in Rhode Islandese) about a month after his death. When I was done, I remember feeling really good, the best I’d felt since Grandpa died. For a long time after, I associated blood donations with a measure of contentment, a happy inner peace.

At least once, here in Topeka, I wasn’t allowed to donate because my blood pressure was too low. While I was at Smith, I donated once or twice, and I remember one of the workers walking by me and wondering what was taking so long. She looked at my paperwork and said, “Oh, no wonder, your blood pressure is 80.” (It was actually 88/60, but yeah, probably too low, they shouldn’t have let me donate.) I can’t say for sure if that was the same donation that resulted in “the bruise,” but it probably was. That would have been during the 1993-1994 school year. I had a bruise on my arm for over two weeks! I got worried after a while when I felt a bump under there, called Health Services, and they said it was probably nothing to worry about – if I recall correctly, it was basically a kind of scab under my skin. (Oh, okay, that sounds great!) A few days after my donation, this picture was taken: 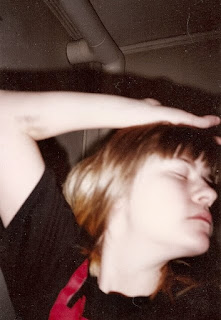 The flash was bright, but even so, you can see the gray area on the bend in my arm. Before it finally went away, that thing turned all kinds of colors. But still, it didn’t prevent me from continuing to donate blood, when there was a blood drive I could fit into my schedule.

But in early December 2006, the last time I tried to donate before yesterday, I had a bad reaction for the first time. The woman had told me to squeeze my hand every three to five seconds, which I later guessed was probably faster than was good for me – because I had never had a bad time before, only a bruise, so if that’s not the reason, I don’t know what it was. After that, I was sort of afraid to donate again, which is why I waited so long – until yesterday.

It’s weird how fast it happens: I’m lying there, my breath and my chest start to feel just a little different, and then I’m suddenly warm all over and everything looks surreal, and when I try to close my eyes, the blood drive workers say, “Open your eyes, keep your eyes open!” and yesterday I could feel drops of sweat falling down each side of my neck. Then they tilt me back, and put one ice pack on the front of my neck, and one under the back of my neck. They give me apple juice, and ask about every thirty seconds, “How are you doing?” and then, “Are you doing okay?” And the thing is, you can’t be sure how you are, it just feels too unreal. They had an Abbott and Costello DVD on, up on a big screen, and it was the disc menu, and I just kept looking straight ahead at it – “Don’t close your eyes, keep them open!” – and thinking to myself “Play All, Episode 1, Episode 2, Bonus Features,” and again, “Play All, Episode 1, Episode 2,” and I nearly said it out loud, “Play All, Episode 1…” By the time you really are “okay,” you don’t have to think about the question when they ask you. If they ask and you aren’t sure, request some juice, and just keep breathing. And whatever you do, don’t close your eyes!